Although it is mostly used as an engineering tool, our Energy2D software can also be used to create simple Earth science simulations. This blog post shows some interesting results about the Hadley Cell.

The Hadley Cell is an atmospheric circulation that transports energy and moisture from the equator to higher latitudes in the northern and southern hemispheres. This circulation is intimately related to the trade winds, hurricanes, and the jet streams. 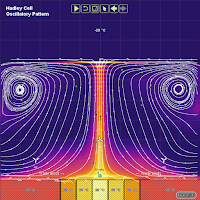 As a simple way to simulate zones of ocean that have different temperatures due to differences in solar heating, I added an array of constant-temperature objects at the bottom of the simulation window. The temperature gradually decreases from 30 °C in the middle to 15 °C at the edges. A rectangle, set to be at a constant temperature of -20 °C, is used to mimic the high, chilly part of the atmosphere. The viscosity of air is deliberately set to much higher than reality to suppress the wild fluctuations for a somehow averaged effect. The results show a stable flow pattern that looks like a cross section of the Hadley Cell, as is shown in the fir 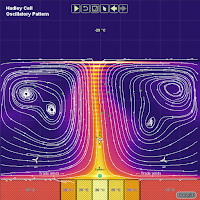 When I increased the buoyant force of the air, an oscillatory pattern was produced. The system swings between two states shown in the second and third images, indicating a periodic reinforcement of hot rising air from the adjacent areas to the center (which is supposed to represent the equator).

Of course, I can’t guarantee that the results produced by Energy2D are what happen in nature. Geophysical modeling is an extremely complicated business with numerous factors that are not considered in this simple model. Yet, Energy2D shows something interesting: the fluctuations of wind speeds seem to suggest that, even without considering the seasonal changes, this nonlinear model already exhibits some kind of periodicity. We know that it is all kinds of periodicity in Mother Nature that help to sustain life on the Earth.

One thought on “Simulating the Hadley Cell using Energy2D”