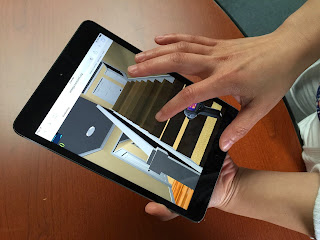 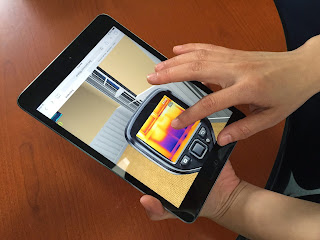 SimBuilding (alpha version) is a 3D simulation game that we are developing to provide a more accessible and fun way to teach building science. A good reason that we are working on this game is because we want to teach building science concepts and practices to home energy professionals without having to invade someone’s house or risk ruining it (well, we have to create or maintain some awful cases for teaching purposes, but what sane property owner would allow us to do so?). We also believe that computer graphics can be used to create some cool effects that demonstrate the ideas more clearly, providing complementary experiences to hands-on learning. The project is funded by the National Science Foundation to support technical education and workforce development. 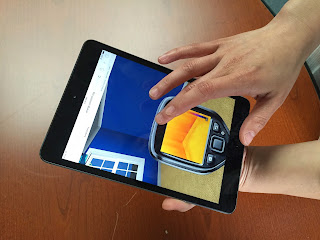 SimBuilding is based on three.js, a powerful JavaScript-based graphics library that renders 3D scenes within the browser using WebGL. This allows it to run on a variety of devices, including the iPad (but not on a smartphone that has less horsepower, however). The photos in this blog post show how it looks on an iPad Mini, with multi-touch support for navigation and interaction. 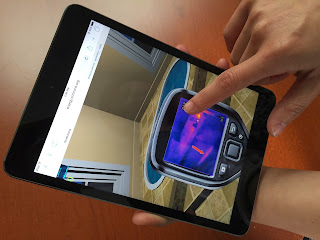 In its current version, SimBuilding only supports virtual infrared thermography. The player walks around in a virtual house, challenged to correctly identify home energy problems in a house using a virtual IR camera. The virtual IR camera will show false-color IR images of a large number of sites when the player inspects them, from which the player must diagnose the causes of problems if he believes the house has been compromised by problems such as missing insulation, thermal bridge, air leakage, or water damage. In addition to the IR camera, a set of diagnostics tools is also provided, such as a blower-door system that is used to depressurize a house for identifying infiltration. We will also provide links to our Energy2D simulations should the player become interested in deepening their understanding about heat transfer concepts such as conduction, convection, and radiation.

SimBuilding is a collaborative project with New Mexico EnergySmart Academy at Santa Fe. A number of industry partners such as FLIR Systems and Building Science Corporation are also involved in this project. Our special thanks go to Jay Bowen of FLIR, who generously provided most of the IR images used to create the IR game scenes free of charge.