Infrared imaging evidence of geothermal energy in a basement

Geothermal energy is the thermal energy generated or stored in the Earth. The ground maintains a nearly constant temperature six meter (20 feet) under, which is roughly equal to the average annual air temperature at the location. In Boston, this is about 13 °C (55 °F).

You can feel the effect of the geothermal energy in a basement, particularly in a hot summer day in which the basement can be significantly cooler. But IR imaging provides a unique visualization of this effect. 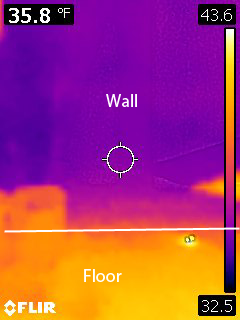 I happen to have a sub-basement that is partially buried in the ground. When I did an IR inspection of my basement in an attempt to identify places where heat escapes in a cold night, something that I did not expect struck me: As I scanned the basement, the whole basement floor appeared to be 4-6 °F warmer than the walls. Both the floor and wall of my basement are simply concrete — there is no insulation, but the walls are partially or fully exposed to the outside air, which was about 24 °F at that time.

This temperature distribution pattern is opposite to the typical temperature gradient observed in a heated room where the top of a wall is usually a few degrees warmer than the bottom of a wall or the floor as hot air rises to warm up the upper part.

The only explanation of this warming of the basement floor is geothermal energy, caught by the IR camera.