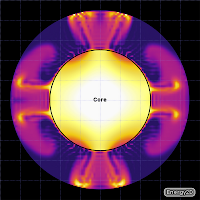 It is my goal to make the Energy2D software a powerful simulation tool for a wide audience. Last week I have added some engineering examples and blogged about them.

Last night I came up with an idea for simulating mantle convection, the slow creeping motion of Earth's rocky mantle caused by convection currents carrying heat from the interior of the Earth to the surface. It turned out that the idea worked out. 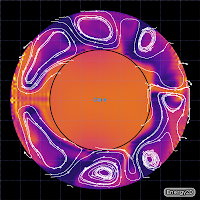 This blog post demonstrates the first geoscience simulation created using Energy2D. The two screenshots show mantle convection at different times. The streamlines in the second image represent the convective currents. From the simulation, you can see the gradual cooling of the core due to mantle convection--This happens in the time frame of billions of years, but a computer simulation can show it in a few seconds. For simplicity, we don't distinguish the inner core and the outer core in this model. Later, we can build a more complex one that includes these subtle details.

The simulation is available online at: http://energy.concord.org/energy2d/mantle.html. Take a look and stay tuned for more Earth science simulations--brought to you by Energy2D!

One thought on “The first Earth science simulation in Energy2D is here: Mantle convection!”