Posted on August 3, 2011 By Charles Xie
One way to tell if a plant is a plastic fake or not is to touch a leaf. If it feels cool, the plant is a real one. Have you ever wondered why a leaf feels cool? (A leaf of an indoor plant always rests at about the room temperature, plastic or real. It is not really cooler before you touch it. You can confirm this by measuring its temperature using a sensitive temperature sensor.)

We know metals feel cold because they conduct heat fast. Within a given amount of time, our fingers lose more thermal energy to a piece of metal than to a piece of wood.

Do leaves also conduct heat fast? On the contrary.

Let’s put a fresh leaf on top of a piece of dry paper. The first set of IR images in this post shows what happened after I used two fingers to touch the leaf (on the left) and the paper to warm them up. The result tells that the leaf actually conducted heat more slowly than the paper, which has much lower thermal conductivity than metals.

Now, we have a problem. We know leaves feel cooler than paper. But leaves conduct heat more slowly than paper! Our sense of touch honestly tells us that our fingers lose more thermal energy to leaves than to paper. So where does the thermal energy go on a leaf, if it doesn’t diffuse to other parts?

My theory is backed by the fact that a dry leaf conducts heat as fast as paper (IR images not shown here). This should not surprise you as paper is made of dehydrated wood fibers.

Now, the question is why the water in the spongy layer doesn’t dissipate thermal energy quickly as water in a cup does (I confirmed the energy dissipation in water by IR imaging, which is not shown here). The thermal conductivity of liquid water is about 0.58 W/(m*K), compared with 0.024 W/(m*K) for air, 0.016 W/(m*K) for water vapor, and 0.05 W/(m*K) for paper. Somehow, the water trapped in the spongy layer cannot conduct heat like free water does. 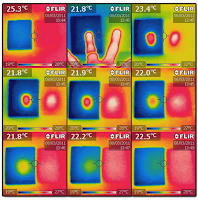 Let’s get get a wet (20% of full water absorption capacity) sponge (left) and a dry one (right) and look at their thermal conductivities under an IR camera. Again, I used my fingers to leave a heat mark on each. The second set of IR images shows a surprising result: the wet sponge appeared to conduct heat more slowly than the dry one!

Does this thermal conductivity protect plants’ leaves? Have you wondered why some plants are anti-freezing and some are not? Leaves may have very complicated thermal regulation that we don’t quite understand.