An infrared view of bees

I have been wanting to see what I can do with IR imaging in my backyard. Folks at the Discovery and Animal Planet channels use IR imaging regularly to show thermal patterns of animals and plants. So I guess I could do something with it. I cannot afford a high-definition IR camera. But I think my low-grade IR camera should be able to catch something. Here is an interesting story about bees. 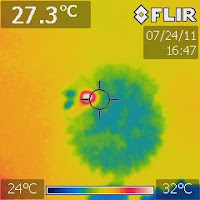 Bees are warm-blooded insects. In order to fly, bees must heat up their flight muscles to above 30oC. So let’s check this using an IR camera.

Indeed, a bee looks warm through the IR camera. To be more specific, the thorax of a bee appears to be warmer than the rest of its body (see the IR image to the right). I observed both a honey bee and a bumble bee. Both types have a warmer thorax, where the flight muscles are located. Exactly why the muscles can operate only at a warm temperature is an interesting question.

Bees are known to form societies that depend on successful division of work. Researchers have been using high-definition IR imaging to study bee behavior. With the assistance of IR imaging, German researchers led by Prof. Dr. Jürgen Tautz at Würzburg University found a new type of role known as the heater bees. The heater bees are responsible for maintaining the temperature in the hive where young bees (pupae) grow in sealed wax cells. The bees purposely leave some empty cells among those pupa cells so that the heater bees can crawl into them to warm up the pupae. By varying the temperature of each pupa they can determine what kind of bee it will become. As a result, the heater bees are vital in determining what job a young bee will perform once it matures. In the IR video, heater bees’ thoraxes also appeared to be warmer, agreeing with what I observed using my IR camera for a worker bee.

Another article published in Optics Express discussed using IR imaging to evaluate beehive population. The idea is based on the assumption that the more bees in a hive, the warmer it would be. An unhealthy colony that has lost population would appear colder in the IR view, as the number of heater bees might have died down because of the lack of worker bees and hence the food they bring back. And if there are not enough heater bees, the pupae would not grow up normally, worsening the situation.

If you don’t want to disturb bees and get stung by them, the non-touch, non-invasive IR imaging is probably the best way to go. 🙂 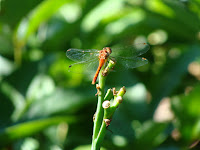 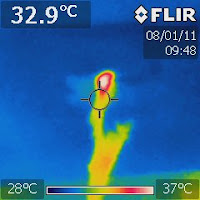 Other flying insects like flies, dragonflies, cicadas, and wasps have a similar thermogram (i.e., warm thorax while active). See these two additional images. Or see this blog post about a moth.

I didn’t observe warming in ants. They probably don’t produce heat. Or they could be just too small to emit any appreciable IR radiation.