This is the third followup of the blog article: “A perfect storm in a cup of salt water?“

I woke up last night with a perfect explanation for the mysterious temperature gradient observed in a saturated salt solution. It is the recrystallization of salt at the bottom of the cup that releases the heat. 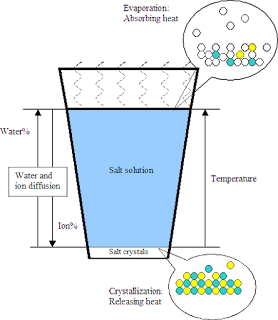 Since water molecules are constantly evaporating from the surface of the solution, a corresponding amount of ions must return to the crystal form at the same time–because a reduced amount of water in a saturated solution in the cup cannot take them any more. This most likely occurs at the bottom since the surface of the precipitate already provides a perfect ground of crystal growth. When ions adhere to the surface of a crystal, heat is released. The amount of released heat is approximately equal to half of the cohesive energy of the salt crystal (because it is a surface adhesion), which may be quite high because of the strong electrostatic attractions in the ionic crystal. The released heat transfers to the solution near the bottom and, together with the evaporative cooling effect on the surface, creates the temperature gradient we observed. The entire process runs continually across the solution because of the diffusion of water molecules and ions driven by their concentration gradients: the concentration of water/salt becomes lower/higher at the surface when water evaporates.

There are four evidences that support this theory: 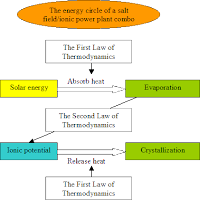 Now, how can we make use of this effect to produce clean energy? As we produce sea salt by using solar energy to evaporate the water in brine anyway, might it be possible to harvest the energy released from the crystallization process? This seems like a stone that kills two birds: generating electricity while producing salt.

The diagram above illustrates the energy cycle of a saltpan/ionic power plant combo. This design is based on a chain reaction that involves two phase changes in a salt solution to convert solar energy into electricity through the ionic potential.

PS: I found in Wikipedia the concept of solar pond that uses a large pool of saltwater to collect solar energy. I think its mechanism is different from what I discussed above. I have had no luck reproducing the effect of a solar pond in a cup yet.